The Arlington Connection’s story on our facility. You can find the original article here. 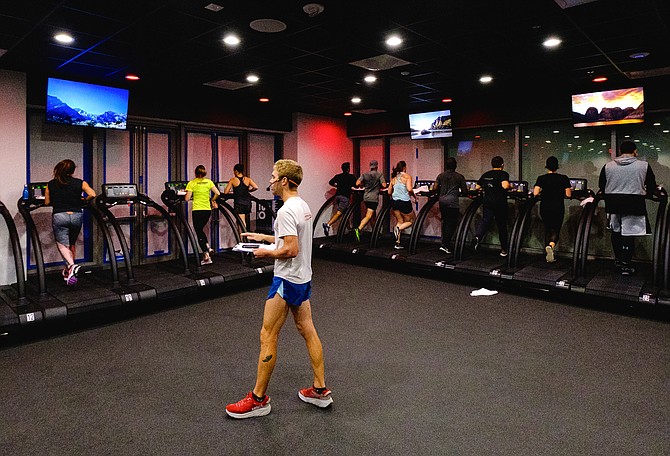 The 1,800-square-foot workout area offers plenty of space for both treadmill and strength workouts.

“By all accounts, Arlington is a runner’s city. The Marine Corps Marathon crisscrosses it coming and going. Venture out any morning, afternoon or evening and you’ll find a number of runners barreling around town, solo or in organized groups, putting in the miles while throwing down the gauntlet.

#So it’s only natural, then, that Clarendon has become the home of the area’s first running-specific training center. The Formula Running Center opened its doors last weekend, and classes began this week.

#“What we’re trying to create here is a complete training experience for runners and other endurance athletes as well,” said Formula Running Center’s Christopher Hoffman, who owns the facility with his business partner, Nicole DonVito.

#A walk through the center shows the breadth of its offerings. From a diet and overall biometrics facility to a cryotherapy chamber, massage room and soaking tub, the Formula Running Center leaves no stone unturned in terms of both preparation and recovery.

#But it’s the main workout room that is perhaps the most impressive: The expansive, 1,800-square-foot space is lined with 24 state-of-the-art Woodway treadmills, with televisions hoisted high above the space and interspersed throughout the gym-style room.

#But those TVs aren’t for watching the latest episode of “General Hospital” or your morning’s “SportsCenter” update. They’re providing data for the workouts themselves, which are led by trainers to keep the room on pace, similar to a cycling spin class. Along the opposing wall from the treadmills sit more than a dozen workout stations, offering a number of non-running options.

#Some classes are all running-focused, ranging from 60 to 75 minutes in length. But some spice things up even further.

#“We’ll also have a class called a tread-and-train class, where it’s split between running on treadmills and working out on our workout floor,” Hoffman said.

#Beginners need not feel too intimidated to take part. While every class is aimed at meeting participants where they are, there will also be a specific class just for newbies, DonVito said.

#“We are going to offer a beginner’s class as well, so while you can adjust any class to your skill level, we will have a beginner’s,” she said.

#After class, or on rest days, participants can take part in yoga, foam rolling and stretching classes within a separate studio. On nice days, the classes might move outside to the Formula Running Center’s outdoor space, which will also serve as an outdoor pit stop for running clubs, Hoffman said.

#Once a runner’s classes are done for the day, it’s time to recover. And there are a multitude of ways for athletes to do so, ranging from a stint in the infrared sauna to some time in compression sleeves, from the cryotherapy chamber to the cold-water soaking tub.

#“We can set (the tub) up as low as 42 degrees; it stays cool on its own, it’s essentially a one-person pod,” Hoffman said.

#Participants can gain access to the workouts, recovery spaces and biometrics consultations in several ways: On a per-credit basis, buying “credit packs” that can be spent on various classes or recovery options, or on an unlimited basis, featuring various perks of the program. Credit packs start at $142.50 a month and can be customized from there.

#The Formula Running Center is aimed at runners and athletes from all walks of life, from the elites to the rookies, Hoffman said.

#“We want to be open to everybody, whether you’ve never run a day in your life, whether you just want to get out and walk your first mile or whether you’re training for your ultramarathon, we can handle anything here,” he said.